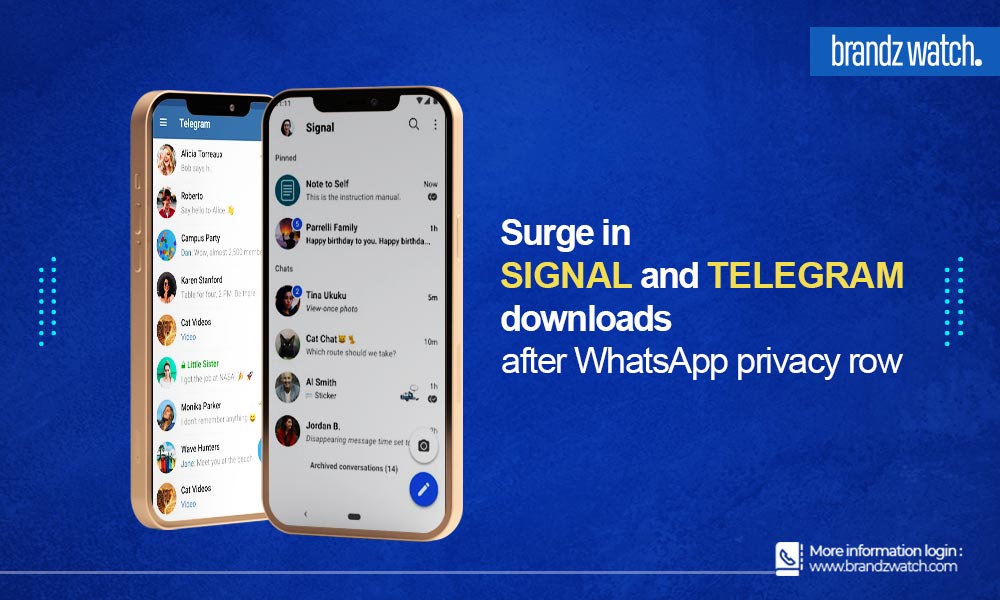 Signal and Telegram are set to break the WhatsApp monopoly in instant messaging after the latter reserved location and phone number sharing rights in its new privacy terms. According to Apptopia, a research firm, Signal experienced over 8,10,000 downloads on Sunday, which signifies an 18-fold jump in just four days of WhatsApp’s privacy row.

Earlier, Signal was used primarily by activists and journalists as its high-end encryption prevents the app itself from peeking into any conversations. Its open-source nature and absence of local backup leave no trace of the media or messages shared over the platform.

Furthermore, Signal is managed by a non-profit organization that ensures no advertisement, even in the future. In a data-driven world, Elon Musk’s tweet and general public awareness over privacy have managed to translate into decreasing WhatsApp users.

In its report, Apptopia states that the average daily WhatsApp installs reduced by 7% across the globe. In response to the drastic market shift, WhatsApp has issued an official clarification on its official Facebook page.

According to the IM giant, WhatsApp and Facebook cannot have message logs, open access to user location, access to contacts, or manipulation in the privacy of WhatsApp groups. Furthermore, WhatsApp has promised to roll out a “Disappearing message” feature – similar to Signal’s pre-existing message destruction feature – for all chats that can be enabled by the user.

However, the official post was flooded with comments that claimed it to be a panic move and urged people to shift to Signal.

Amidst all this, some users are preferring Telegram as it provides optional encryption over ‘Private’ chats only instead of all conversations. In addition, Telegram outclasses its competitors with the option of sending files up to 1.5GB along with adding over 2,00,000 people in one group and still maintain end-to-end encryption over video calls. However, as per its announcement, Telegram plans to roll out advertisements by the end of this year.

As of now, it looks like the Signal and Telegram user base could increase exponentially in the upcoming weeks.