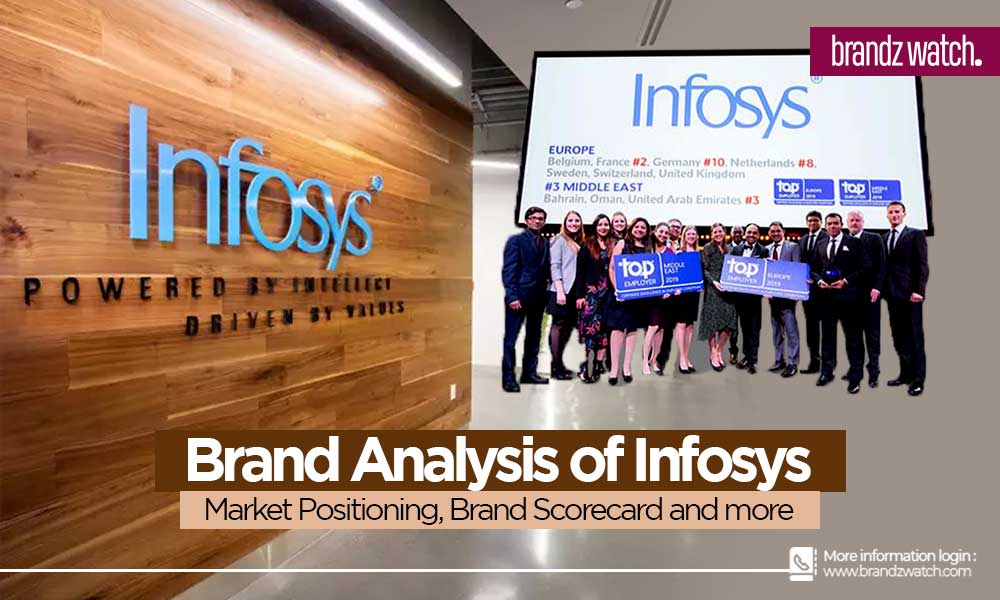 About Infosys
A global frontrunner in digital services and consulting, Infosys is an NYSE listed IT Service Company that houses over 2 lakh employees. The company was established in 1981 by N.R Narayana Murthy and six engineers in Pune, India, with a capital of merely US $250. From signing up its first client and then relocating its corporate headquarters to Bangalore, to opening its first international office in the US, the company has grown tremendously over the decades. Today, it is worth over US $12 billion.
During those four decades since its inception, Infosys has brought about major changes within the global IT sector all the while bringing India in the world map of software services. It is also the first Indian IT company to be listed on NASDAQ. With its prominence in a multitude of sectors including aerospace, retail, automobile, oil and gas, etc, Infosys caters to a large client base spanning across 46 countries.

Brand Scorecard
As of 2020, Infosys spearheads the global IT and tech sector. It not only provides IT solutions to large enterprises but also seeks to transform their businesses for the better. This is one of the major reasons behind its strong positioning in the market. Furthermore, abiding by the best corporate governance policy, Infosys is widely recognised among the investors all over the world. In fact, it has been awarded a rating of CGR 1 (Corporate Governance Rating 1) by ICRA (Investment Information and Credit Rating Agency).
Talking about the work environment at Infosys, it has over 1800 reviews and around 3.24 rating on JobBuzz and is touted as an employee-friendly organisation. It boasts of a whopping 3.9 rating on both Indeed and Glassdoor with most employees acclaiming the company for its Job Security & Advancement and a good work-life balance. Despite that, Infosys has long been struggling to contain high attrition rate especially among employees with three to five years of experience. This has also been mentioned by Krishnamurthy Shankar, Executive Vice President and Group Head of Human Resource at Infosys, during an interview in 2019.
While Infosys is currently the second largest IT Company in India, its services are not the most affordable. This is why, only those enterprises with high IT budget and needs will be able to access them. Nevertheless, the qualities of Infosys’ deliverables are being hailed as ‘unparalleled’ with its attention to detail being a major plus point.