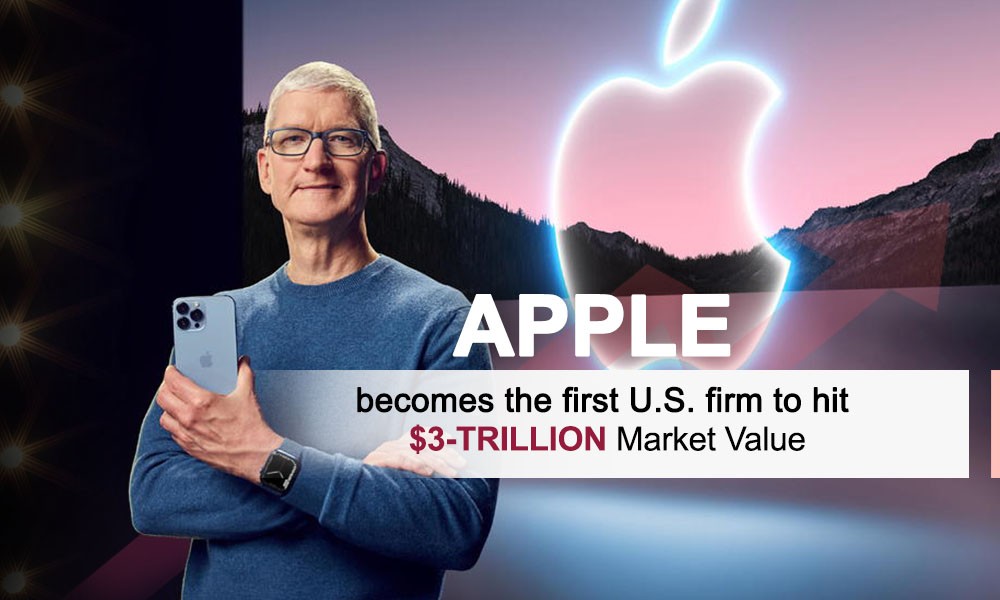 Apple has become the first company to hit a $3 trillion stock market value before the end of the day. Investors bet the iPhone maker will continue to launch products that sell like hot cakes as it dives into new markets like virtual reality and automated cars.

The world’s most famous brand has set new benchmarks as investors are sure that consumers will be ready to splurge top dollars for iPhone devices, MacBook gadgets, and services like Apple Music and Apple TV.

Jake Dollarhide, chief executive officer of Longbow Asset Management in Tulsa, Oklahoma, said, “It’s a fantastic accomplishment and certainly worthy to be celebrated.” He further stated, “It just shows you how far Apple has come, and how dominant it is seen as in the majority of investors’ eyes.”

Apple has shared the $2 trillion market value club with Microsoft whose worth is over $2.5 trillion. Tesla, Amazon, and Alphabet have market values beyond $1 trillion, as per Refinitiv.

Scott Wren, senior global market strategist at Wells Fargo Investment Institute quipped, “The market has decided to reward companies that have robust fundamentals and balance sheets, and the companies which are reaching these sort of biggest market caps have shown that they are powerful businesses and not speculation.”

Apple’s shares have skyrocketed up to 5,800 percent ever since co-founder and erstwhile chief executive Steve Jobs unleashed the first iPhone in January 2007, far outscoring the S&P 500’s profit of about 230 percent during the same tenure.