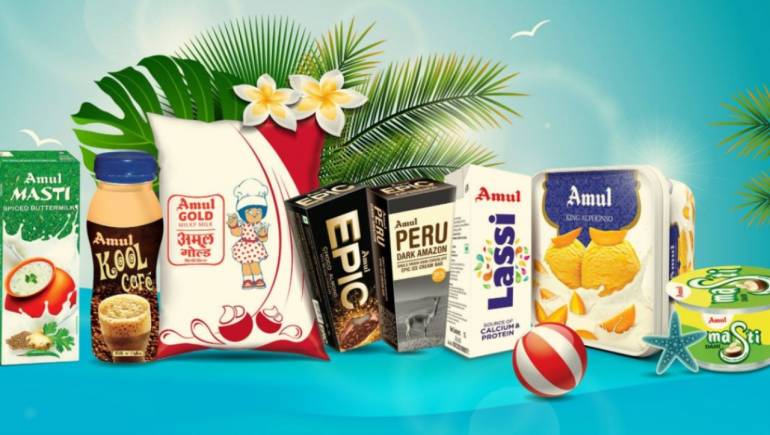 The little moppet in a familiar polka dotted dress is what strikes our mind when we think of Amul brand. But this is not the only mascot of the company. What is now claimed as “The Taste of India” has come a long way ever since its formation in 1949.

Amul was formed as a reaction to the abuse of the farmers and milk producers by operators of the main existing dairy, the Polson dairy which procured milk from them at a low price and sold it to the then Bombay government. The unfair exchange prices caused the farmers to take their plea to Sardar Vallabhbhai Patel. Result? Formation of the Kaira District Co-operative Milk Producers‘ Union Limited in Anand that pasteurized milk produced by the farmers for the Bombay Milk Scheme and by the end of 1948, the number of farmers has increased to over 400. However, the Bombay Milk Scheme couldn’t accommodate the excessive milk supply that it has been receiving. That is how Amul Cheese and Amul Butter came into picture. A plant was set up to process all the surplus milk into products such as milk powder, cheese and butter (Now you know the story behind Amul butter that you relish every morning spread on toast :).

The Milkman of India

Late Dr Verghese Kurien wasn’t labelled ‘The Milkman of India‘ for nothing. From first arriving in Anand as a government employee and helping out farmers with machinery repair to revolutionising India’s dairy industry with the White Revolution or Operation Flood, he was Amul’s true architect.

Dr Kurien’s vision was to offer small scale farmers with quality control facilities. Therefore in 1973, the Gujarat Cooperative Milk Marketing Federation was set up to supply milk and milk products manufactured by six district cooperative unions of Gujarat. Currently, GCMMF is India’s largest exporter of dairy products and Amul, the umbrella for all its products.

Ever wondered how the rather nostalgic-evoking ‘Butter Girl’ of Amul originated?

The brain behind Amul’s Butter girl was Sylvester daCunha (daCunha Communications) who created the mascot in 1966. Over 50 years have passed, and the moppet in polka-dotted dress is still winning hearts whether on a butter packet or on a billboard accompanied by some witty catchphrase. Amul posted a picture of its mascot Butter Girl celebrating with PV Sindhu for winning the Bronze medal in Tokyo Olympics on August 2021.

While the time has changed with the advent of technology and many brands have been perished, Amul has only grown stronger with time. However, its brilliant marketing campaigns have carved out a niche for itself. Whether it is commenting on the contemporary events or sharing a message, Amul has never fallen short of satire nor has it undermined the brand’s true essence.

Amul is primarily known for its milk, cheese and butter however the company has expanded into beverages, chocolates, sweets and bakery. With the digital advancement and in turn the cut-throat competition in the market, it has never stopped from remaining the darling of consumers with its constant innovation. Products like Roti Softner, Camel Milk and Amul True corroborates this fact.

For Amul, its slogan ‘The Taste of India’ is more than just a mere advertising jargon and there is no denying this fact. From its representation of farmers’ economic freedom to its never-ending commitment to accessing quality food to the rural people which they otherwise couldn’t have afforded, it isn’t for nothing that the brand’s name has secured a place in every Indian household today.