Ajinkya Rahane, Virat Kohli, and Virat Sharma will be leading the side for the first Test match.

What is the Schedule of India vs New Zealand series

India vs New Zealand will be a three-match T20I series. The series will then be followed in three weeks by two Test matches. Ranchi will host the second match in the T20I series on November 19, while Jaipur will play the opening match. The caravan will then travel further east to Kolkata, where the final and third T20I will take place on November 21. All three matches in the T20I series start at 7:00 PM IST. 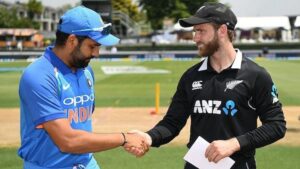 Virat Kohli’s Indian team has traveled 7435 miles to New Zealand in order to play 42-day cricket tours. Indian sponsors are following suit. India will play 5 T20I’s and 3 ODIs in New Zealand. Each of the three trophies will have an Indian sponsor. Kent RO, a Noida-based water purifier brand, has signed a title rights sponsorship agreement with New Zealand Cricket (NZC). They will add their name to the T20 series that begins this Friday. Royal Stag, an Indian whisky brand, will sponsor the Test and ODI trophies.

Brands lined up for Sponsoring | India vs New Zealand

Sponsors do not need to be involved in business in the country. Neither Kent RO nor Royal Stag has any footprint in New Zealand. Television viewership drives investment. When Team India is active, TV viewership is high.

Amul, India’s most well-known dairy brand, took over jersey rights for South Africa’s cricket team in the T20 series against India. They sponsored Afghanistan at the ODI World Cup in England and New Zealand at the 2017 Champions trophy. This helped them to grab most of the television eyeballs. Kent RO also saw the benefits of indirectly investing in cricket in India when they sponsored the jersey for the West Indies team last year.

Ebix, an Indian software company based in Noida, has acquired another sponsorship – the ‘Powered By” slot for the six-week-long tour.